Just added to your cart

Need to know the current market value of your art and antiques? Please click here to know how we can help you with providing a professional and reliable appraisal report which is complying with the USPAP rules and standards. Then you may invest on or sell an item with full confidence.

Khatamkari is one of the Persian arts of marquetry wherein the surface of wooden or metallic articles is decorated with pieces of wood, bone and metal cut in a variety of shapes and designs.

Materials used in this craft can be gold, silver, brass, aluminium and twisted wire. Various types of inlaid articles and their quality are known by the size and geometrical designs. Smaller pieces result in a higher value of the 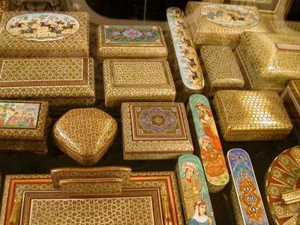 This craft consists in the production of incrustation patterns (generally star-shaped), with thin sticks of wood (ebony, teak, ziziphus, orange, rose), brass (for golden parts), camel bones (white parts). Ivory, gold or silver can also be used for collection objects. These sticks are assembled in triangular beams, assembled and glued in a strict order to create a geometrical motif such as a six-branch star included in a hexagon.

At times, cylinders are cut into shorter cylinders and then compressed and dried between two wooden plates, before being sliced for the last time, in 1 mm wide trenches. These sections are ready to be plated and glued on the object to be decorated, before lacquer finishing.

The tranche can also be softened by heating in order to wrap around objects. Many objects can be decorated in this fashion, including jewellery boxes, chessboards, pipes, desks, frames or musical instruments.

Marquetry designing is highly elaborate. In each cubic centimetre of space, up to approximately 250 pieces of metal, bone, ivory and wood are laid side by side. This art, to some extent, has existed in Iran from long ago.

Inlaid articles in the Safavid era took on a special significance, as artists used this art on doors, windows, mirror frames, Qur’an boxes, pen and pen holders, lanterns and tombs.

The ornamentation of the doors of holy places predominantly consists of inlaid motifs. These specimens can be observed in the cities of Mashhad, Qom, Shiraz and Rey. In the Safavid era, the art of marquetry flourished in the southern cities of Iran, especially in Isfahan, Shiraz and Kerman.

An inlaid desk, which is one of the definitive masterpieces of this art, was awarded the first prize and a gold medal in an art exposition in Brussels recently. This desk is now preserved in the National Museum of Washington. Also, in some royal buildings, doors and various items have been inlaid. The inlaid-ornamented rooms in Sa’dabad and Marble Palace in Tehran are among masterpieces of this art.

In Safavid era, khatamkari was so popular in the court that princes learned this technique alongside the art of music or painting. In the 18th and 19th centuries, khatamkari declined, before being stimulated under the reign of Reza Shah, with the creation of art schools in Tehran, Isfahan and Shiraz.